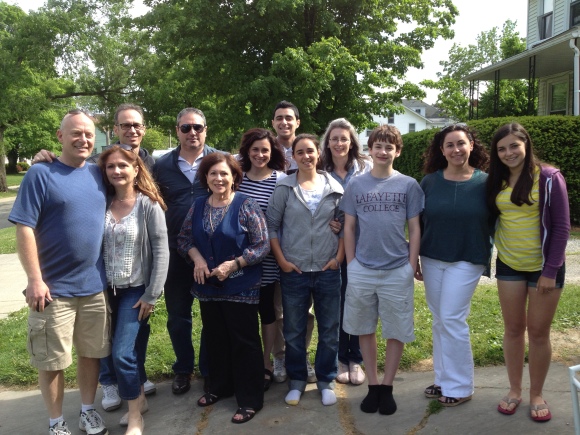 The Halpert/Edelson clan gathers to celebrate my daughter’s college graduation, May, 2013. 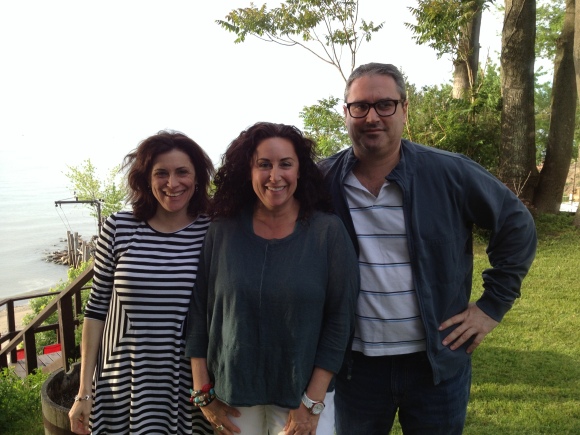 Gathering at our lakeside cottage to celebrate my daughter’s college graduation, May 26th, 2013

I was moved by Frank Bruni’s article in Sunday’s New York Times, The Gift of Siblings, since it mirrors the feelings I have towards my brother and sister. This past weekend, my daughter graduated from college. My brother planned a visit from China, where he lives, around the big event and my sister also made the two hour drive to be there, as did my husband’s sister, who drove nine hours from Boston with her son, and his brother and his wife, who live only an hour away from the college. The extended family rendezvoused at a cottage overlooking Lake Erie that we rented for the weekend. As I glanced out of the window as the sun was setting over the lake and saw everyone celebrating my daughter’s milestone together, I was grateful that I, like Bruni, had a big clan. My brother and sister are there for me during these exhilarating moments, but just as important, we’re there to prop each other up during the tough times. Just before my father passed away over a year ago, we took turns visiting him and tending to my mother’s needs. When he died, we collaborated on a fitting tribute filled with stories about his life that included his trademark good humor. When my children were only ages one and four, my mother-in-law passed away. As my husband’s large family filled her former house to pay their respects, I decided then that I was going to have another child, so my children could have an even larger support network. Had I the patience and fortitude, I would have had a fourth as well. As parents postpone childbearing and end up having smaller families, with only children becoming more the norm, I feel for the children who won’t have siblings to surround them the way I had, who will have to bear the burden of their parents’ illnesses, and eventually their death, alone, or with minimal support. This situation will take its toll emotionally on an entire population of children of boomers. I hope, that as young people contemplate the size of their family today, that they consider all that siblings have to offer. Like Bruni, I’m not only grateful for mine, but also that my children will have each others’ shoulders to lean on as they face the inevitability of their own parents aging

It’s taken me nearly a week since a dear friend died in a car crash to write this blog. Steve Gradwohl was killed last Saturday at the age of 51 after his car veered through three lines of traffic on a freeway, then hit an embankment. In addition to being a loyal friend to many and a wonderful husband and father, he was also an internist. And the testimonials from the many patients he treated, provided in comments in this AnnArbor.com article, show that he wasn’t your typical doctor, but one that went above and beyond to respond to his patient’s concerns.  He received the Outstanding Clinician Award in 2012 from The University of Michigan Medical School. The outpouring from those who knew him only as their doctor was no surprise to me; he was both my husband’s and son’s physician. But what impressed me more was that he provided the same level of attention to all his patients. You rarely had to wait more than a day to get an appointment, and then he saw you within five minutes of your arrival, giving you his undivided attention and quickly getting to the diagnosis. His promptness was particularly astounding, given the fact that he had so many patients; everyone in our neighborhood seemed to see him. He provided his e-mail to his patients and often responded immediately whenever a patient had a question — even on the weekend — with his trademark “SEG” signature. I’m relaying this story about Steve not just because all of those close to him are reeling from this loss, but because I think it’s important to understand why he’s such a good doctor. Recently, I waited an hour with my daughter, who was ill and feverish, for her pediatrician to appear, only to have to endure the same experience a week later with my son’s dermatologist. When those doctors walked in the door, nary an apology was uttered. There’s a feeling that patients should feel fortunate to be part of such a fine medical establishment and just grin and bear it. Appointments take weeks to book; doctors can take several days to respond to questions and a weekend reply is unheard of. I’m sure the situation I face at my medical center isn’t uncommon. There will be many doctors among those gathering for tonight’s memorial to honor the memory of Steve. I hope his legacy will be that they aspire to provide the same level of care that this incredible doctor provided — something everyone should be able to expect from their physician.

Angelina Jolie’s disclosure that she underwent surgery for a preventive double mastectomy after learning she is predisposed to breast cancer set off a firestorm of discussion, as it often does, when celebrities become spokespeople for certain types of diseases or health care decisions. I’m curious, however, whether it will lead to an onslaught of women choosing to have mastectomies who may not face the same type of risks that she, a carrier of the breast cancer gene, had. If more young women choose to get rid of their breasts, they’ll be left with a flat surface where two large, fleshy organs once were. I have first-hand knowledge of this, since, 11 years ago, I was one of the growing number of young women diagnosed with DCIS, an early stage breast cancer, which Peggy Orenstein described so eloquently in a recent New York Times Magazine piece. I, like many with DCIS, chose to have a mastectomy. There’s no way to sugar coat the remains of an amputated breast. There’s a giant scar over a flat surface. For me, the choice to have breast reconstruction, and not have to face the ugly reminder of my mastectomy, was a no brainer. There’s been little discussion, by either Jolie or others in the public eye, of what’s involved, should a person decide to undergo breast reconstruction. Jolie made passing mention to implants she had at the time of her mastectomy, but revealed little about that particular procedure and what it entails. Though I’m sure advancements have been made over the past 10 years, reconstructive surgery is no picnic. I long to write a piece that will tell the many women likely to undergo breast reconstruction just what’s involved, so they can make just an informed decision about that, as they hopefully did about getting their mastectomy.